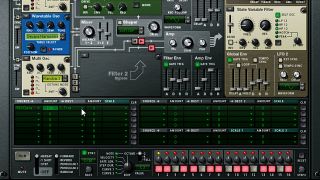 With the release of Reason 4 in 2007, Propellerhead added a new instrument to their virtual studio setup: the mighty Thor.

It was rightly deemed "a synth geek's dream synth" by its creators, and it should come as no surprise that it quickly garnered a congregation of worshippers.

The source of Thor's raw power is the ability to juggle three oscillators and three filters at once, providing a huge number of sonic combinations. The Modulation Bus Routing Section (a modulation matrix on steroids, basically) grants complete control over your signal flow, allowing you to route modulators, CVs and audio signals from anywhere within the synth to... well, anywhere else.

Coupled with the in-built step sequencer, which is capable of far more than just simple melodies, Thor truly grants you endless potential for creativity and experimentation. Oh, and there are built-in effects too. With all these powerful features rolled into a single unit, almost no sound is out of bounds, from sinfully sweet pads to bombastic bass patches.

And Reason owners are no longer alone in their devotion: Propellerhead recently released Thor in its entirety as an app for iPad. Now you can get hands on all the goodness of Thor's oscillators and filters, 1000+ preset patches, and the same level of in-depth modulation routing, plus an on-screen keyboard to tap your heart out with the patches you've made.

Best of all, you can easily move patches between Thor on your iPad and Reason on your desktop - brilliant for designing sounds when away from the studio.

Here we've compiled 11 tips and tricks to help you get the most out of the synth. For loads more on using Thor - from building your first patch to complex sound design tricks - check out the November issue of Computer Music (CM 197).

A great way to get to know Thor - and any synthesiser, for that matter - is to play with the presets. Load up one of the in-built patches and tear it apart, piece-by-piece. You'll get a clear picture of what oscillators are used in the patch, which filters they're run through, and the modulation involved. Once you've broken it down enough, try to build it back up again into a new patch of your own.

Experimenting with the modulation matrix can lead to all manner of crazy and unexpected sounds. Try putting LFOs on anything and everything, then set MIDI Key » Note to modulate the LFO's rate. The LFO will speed up or slow down depending on the note being played, instantly adding character and movement.

Create your own FX

With the right oscillators and filters and some clever modulation routing, Thor can generate some truly unique percussive sounds. Check out some of the presets in Thor's Percussion section to get a better idea of how this is possible - make sure you study the modulation matrix as the routing is key.

Once you've created a sweet-sounding patch, make sure you save it somewhere you won't lose it. You'll soon build up a bank of unique, homemade patches that will distinguish your music from that of those who stick to the presets.

Create patches on the go

The Apple iPad version of Thor allows you to transfer patches you create there to the full version of Reason on your computer, so there's no excuse not to be creating new sounds. Build a bass on the bus, produce a pad on the plane, write a lead on your lunch break - you get the idea.

Learn from the classics

A quick search online will bring up dozens of manuals for classic synth units. Studying these will not only give you a better understanding of how synthesis works, but it can also lead to inspiration for new patches based on classic sounds.

Thor is equipped with a mod wheel, two rotary knobs and two buttons, which can freely be assigned using the modulation matrix. Try assigning them to different parameters within your patch to make them more accessible. The knobs are great for altering frequency settings and LFO rates, and the buttons can be used as on/off switches for modulations. Assign these controls to a MIDI controller for even more intuitive input.

You can create powerful and interesting sounds using Thor alone, but why stop there? Reason has a huge variety of effects modules, all of which can be used to add character to your sounds. The Alligator Filter Gate, for example, is fantastic for changing the rhythmic feel of a sound, and almost any patch can benefit from some reverb from the RV-7000.

Use Thor as an effects processor

While Thor's oscillators are great for generating sounds, the unit can also be used as an effects processor for other devices. For example, wire the main output from a Dr Octo Rex to Thor's Audio In and you'll be able to apply all the trickery of Thor's advanced modulation routing to loops. Try running a drum loop through Thor's comb filter and altering the frequency parameter - this can really give the loop a whole new, distinctive character.

Reason's ReWire feature, described by Propellerhead as "an invisible cable", allows the transfer of audio data between two applications in real time. ReWire can work with a vast array of software, including Ableton Live, Cubase, GarageBand and Logic, so you can still get the best out of Thor, even if you prefer the workflow of a different DAW.