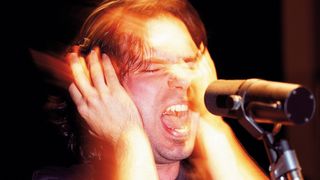 He thinks he's a star, so treat him like one.

If you're a producer, coaxing a great take out of your singer isn't always easy - particularly if you're dealing with a temperamental type.

Never fear, though - MusicRadar has ten tricks you can try to get the vocal recording you really want.

The vocalist is the star of the show, so treat them like it. Make sure they're relaxed, comfortable and have something to drink (but no caffeine - it constricts the vocal chords).

2. Rules are meant to be broken

Follow the singer's rules, not your own. We know you like to use your shower as a vocal booth, but if the singer would rather track in the control room, so be it.

The vocalist needs a good reference, so give them one. Offer comfortable headphones and let the singer advise you on the headphone mix.

Don't be afraid to track the rehearsal take. It may be golden. Often, a singer will stiffen up when the record light is on. You might get a more energetic performance if they don't know they're being recorded. If not, erase it and no one will know.

5. There's no such thing as a rough vocal

If you're tracking a band, you may need to record a guide vocal. Take it seriously, though, since it may be a keeper.

Every take is brilliant. Even the bad ones. Be the singer's biggest fan, but don't set them up with any unrealistic expectations.

So what happens when they suck? You're going to have to tell them, but sandwich any criticism between honest compliments on other aspects of the performance.

8. Something to hold on to

Singers who gig a lot are used to being able to work that dynamic mic. They may not be comfortable with your massive tube mic. You can put a dynamic on a stand in front of them to give them a familiar reference. Track it along with the condenser.

Singing is hard. It stresses the vocal cords and demands a lot of energy. Let the singer take frequent breaks to regain their composure.

If your entire song revolves around the vocals, so should the sessions. Not the mic, not the backing tracks (not today, anyway!), not the software and not the engineering.