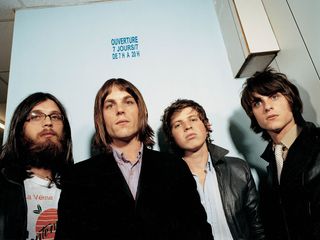 In this video lession, we show you how to play five killer riffs taken from Kings Of Leon's three most recent albums: Aha Shake Heartbreak (2004), Because Of The Times (2007) and their latest hit Only By The Night (2008).

Caleb and Matthew Followill's guitar sound is gritty and up front with Caleb in particular relying on few frills in the effects department. This puts the onus much more on the player to create dynamics and a good tone, which is 'all in the hands'. Practise each riff carefully and slowly before you start playing up to speed.

We played an Epiphone Sheraton II on all of the riffs apart from Fans (where we used an acoustic), through a Line 6 POD using the Vox AC30 setting. The most important setting is the gain, which should be responsive to your playing. The sound should break up when you play hard, but sound clean when you play more gently.

Alternate picking is highly recommended with this riff, because it will help you stay in time and sound consistent. Start with a downstroke on the sixth string, followed by an upstroke on the fifth string. Practise this motion with a metronome until it feels relaxed and comfortable.

Full barre chords are used here, but you should only strum the bottom four strings. Strumming these strings accurately can be a little tricky and there's always the possibility of accidentally striking the top two strings. To prevent this from happening when you're strumming, slightly lift your first finger where it touches the first and second strings.

This should result in a muted sound, which you won't be able to hear in the context of the full chord. You need to continue muting these strings when you lift your first finger for the C/E chord too.

Next page: Four Kicks, Fans and The Bucket

The key to playing this riff is to have a confident but relaxed strumming motion. This will help you to reproduce the swing groove in Four Kicks. As you move your hand in alternating downstrokes and upstrokes, most of the movement should come from your wrist, with just a little play in your elbow.

This approach should help you to strum this swing rhythm with more control. You can make a bit more of the swing feel by playing the downstrokes loudly and the upstrokes a bit quieter. This should bring out the lively 'bounce' to the riff.

This acoustic riff is in the key of E major and it uses a simple open position E chord shape, but in three different positions on the neck. You'll need to play the basic E chord with your second, third and fourth fingers so that, when you slide the shape higher up the neck, your first finger is free to fret the second string.

Moving an E chord across the neck like this is reminiscent of a barre chord approach; the chords resemble A and B barre chords. But here Caleb plays each chord with both E strings (first and sixth strings) ringing out as a drone.

This riff is based on a D A G chord progression. The first guitar part is played using a familiar open position D chord shape. This shape is not limited to playing just D though, and can be moved up and down the fretboard to play the other chords.

The root note of the D chord shape is on the second string, so if you know the names of the notes along this string, you should be able to work out any major chord using the D shape. The second guitar uses the same concept, only with E shape barre chords played on the top four strings only.