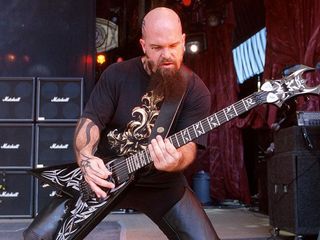 There's no one on Earth quite like Slayer's Kerry King. For over 20 years, the metal guitar master has defined and refined the meaning of the word 'heavy.'

"Heavy is a sound," King told MusicRadar in an interview we'll be posting next week, "but it's also a state of mind. Basically, if you don't think heavy, you're not going to sound heavy - simple as that. Luckily, Slayer has always been about total impact and complete sonic overkill. You can't get any heavier than Slayer, but if you wanna try, good luck with that!"

During our conversation, which covered everything from Slayer's upcoming album Painted In Blood to answering many of your questions, King offered his 3 top playing tips. "I'm not saying that if you follow these rules you'll suddenly wind up sounding like me.

1. Don't worry about staying in key

"I never would have written some of my cooler riffs if I got all hung on what notes are in tune or what notes go together. Take In The Name Of God, which is totally edgy. It starts out with an open E chord and then I slide my index finger from a B to a B-flat. I think the overall tuning is in C#.

"Now, normally everybody would tell you that the sound of an E chord and a B-flat note don't go together, but to me it sounds awesome. Bottom line: whenever somebody says 'You can't do that, because it's musically incorrect,' just give 'em the middle finger and say, 'Fuck it, I like it.'"

2. Learn when to put the guitar down

"Man, when I go home from a tour, I don't touch the guitar sometimes for a month," King says. "I chill. I get involved in my hobbies, I kick back, I don't think about music.

"A lot of people will say, 'That's wrong. You've got to practice every day.' Why? Who said so? Some dude who likes to practice scales every day? I mean, if that's what you're into, fine, go for it. But for me, there's nothing better than a break.

"Most of the time, I come back to the guitar with a renewed sense of excitement and I'm ready to really dig in and discover a lot of cool shit. I don't think that would be the case if I was just sitting in my bedroom going over exercises all day long.

"I'm not saying, 'Don't take the guitar seriously.' I'm just saying, 'Take other aspects of your life seriously too.' Be a whole person. Guitar players have this fear that if they aren't practicing 24/7 that they'll get all rusty and start sucking. I don't practice 24/7 and I don't suck. So there."

3. Be different, any way you can

"We all have our heroes, and a lot of the time we try to emulate the guys that we love," says King "But if you get too caught up in that, all you're going to be is a second-rate version of your hero, and who wants that?

"When we were coming up, I did whatever I could to be different. Like the BC Rich Mockingbird guitars I used to play - this was before I got my own signature series from BC Rich. Nobody was playing Mockingbirds at the time, at least nobody I knew. So I told myself, 'They look different, they sound different, I'm playing 'em.' Pretty soon, I had that going for me.

"Then, when it came to the role of the guitar in Slayer's music, I chose to be different there, too.When we were starting out, all the metal guitar players were concentrating 99 or 100 percent on their solos, their hammer-ons, their scales. I said, 'Fuck that.' I'm going to make the sound of this band based on rhythm. Ten percent of what I do is based on actual soloing.