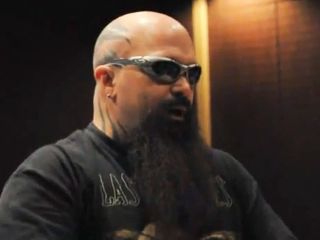 The members of Slayer are talking about their forthcoming album World Painted Blood, due out late this summer. In their view, it marks a new direction - and something of an old one.

"The new music has an '80s vibe to it," says guitarist Kerry King, and I think that's because of the way we wrote it."

Historically, the group would begin the recording process once all the songs were written and fully rehearsed. King says this time was different: "We were together during the writing process more than we had been before, and while my name will be on the songs I wrote, and Jeff's will be on the ones he wrote, there was a lot of interaction between us while the songs were taking shape."

According to producer Greg Fidelman (who was suggested to the band by executive producer Rick Rubin), "Writing in the studio was a new idea for Slayer. I think the fact that the songs were still new and fresh to them, and they hadn't been playing them for six months in rehearsal, kept the vibe and excitement in the studio very high."

Summerizing the songwriting process, singer Tom Araya says, "There are two principal music writers in this band, so you're going to get a combination of speed and heaviness.

"Kerry's writing is really aggressive and fast, while (co-guitarist) Jeff Hanneman likes things to be fast, but with melodies and grooves. In making this album, we seemed to share the same vision from song ideas to titles. It just happens, nothing is contrived, it's not thought out, we just do it."

Check out the following YouTube clip for in-studio interviews with the members of Slayer and producer Fidelman.

Before releasing World Painted Red, Slayer will be hitting the road as co-headliners with Marilyn Manson on the Rockstar Energy Drink Mayhem Festival. Full details and tour dates are available here.