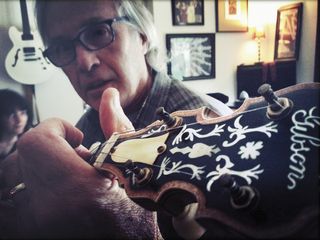 When Guitarist magazine was granted a rare interview with slide guitar supremo Ry Cooder recently, we couldn't resist asking for his tips for slide guitarists.

Ry's new album Election Special is a masterclass in gritty yet exquisitely phrased slide guitar. But despite being responsible for some of the finest slide work on record, including the legendary Rolling Stones track Sister Morphine, Ry denied having any rules of thumb to pass onto other players. He did have this to offer, though:

#1: Get the right weight

"All I know about bottleneck is, what you really want to do is get you one, but get the right weight," he said. "People use 'em too light and I don't see why they do that. But they do, and you don't get any tone that way."

"You [also] have to learn to play a good note. You have to get a nice note that you can control that's in tune. You get your instrument, you sit there and start practising [one note]- and learn how to get a really good note out of the deal. Get you some control."

"Everybody goes too far too soon. They turn up too loud and then they don't have control over the harmonics and then they play and it sounds to me, a lot of times, like the emergency entrance to a veterinary hospital. Like all these poor sick cats crying out…"

Check out the September issue of Guitarist, available 24 August, for the full story on Election Special: from the tone-laden vintage guitars Ry used on the album and his frank views on American politics, to the recording techniques that have helped him become one of the most widely admired guitarists in the world.

Election Special is out on 20 August on Nonesuch Records.