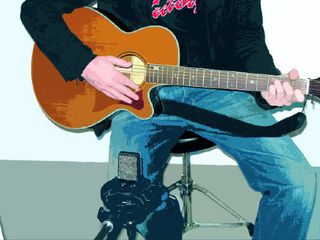 Point your mic at the point where the guitar's neck and body meet.

Recording acoustic guitars differs hugely from recording electric guitars in one vital respect. In the latter, the amp is essentially the instrument. Also, the space in which you're recording is not so critical, as most of the tonality is achieved through very close mic adjustments and processing.

Acoustic guitars, on the other hand, provide most of their own character, in conjunction with their immediate space. And people know what they're meant to sound like, so a bad recording of a guitar will simply sound unnatural. That's why we recommend you even mic acoustic guitars featuring DI sockets.

Acoustic guitars are among the most tonally rich and beautiful of instruments - it's a stern heart that can't be melted by Salma Hayek's ode to Antonio in Desperado. This being the case, it follows that the first step to getting great acoustic guitar recordings is getting a great acoustic guitar sound. To the trained ear, different guitars, strings and even plectrums can make a massive difference to the sound. So before you go any further, make sure things sound good to your ears. If they don't, there's absolutely no chance that you'll be happy with the recording, no matter how skilled you are. Even if you have to swap your stamp collection, get your hands on a suitable guitar for recording.

Acoustic guitars are generally heard in real spaces and have long release times that blend brilliantly with natural reverb. Consequently, overly dry signals will sound dull and lifeless in a way that few conventional algorithms can repair, and it's this failing that most commonly singles out bedroom recordings. The solution, as with most recording techniques, is simple: pick a brighter spot. You want a large room, preferably with wooden floors and hard surfaces.

If your floors are carpeted, try putting some MDF under the player, or change the room. And be sure to place your player near some reflective surfaces.

Finally, the only right place for guitar recordings is as far away as possible from shirt buttons, jean studs, belt buckles, zips, belly button piercings, watches and just about anything else that might bash against the guitar body and ruin an otherwise perfect take.

By now you should have figured out that since acoustic guitars are incredibly tonally rich in the high frequency areas, to properly record them you're going to want the nicest condenser mic you can afford (even if it's only £70 worth - prices are falling rapidly these days). You'll also want the quietest interface your money can buy, as it's impossible to EQ hiss out of such a high-frequency-rich instrument, and one with such a broad dynamic range, without messing up its sound.

As with live vocals, live acoustic guitar microphones are often pressed right up against the hole to get the loudest signal and greatest separation between instruments, but this gives a boxy sound and needs serious EQ. In the studio we can be a little more open, so start with the mic placed around 35 to 45cm away from the guitar, and pointed at the area where the neck and body of the guitar meet. From here it's a simple matter of tweaking the sound to suit your surroundings. Do this by wearing a good pair of closed-back headphones and moving the microphone closer for a fuller sound, or further away for a lighter and more ambient sound. Critically though as with drums, don't give up until you're positive you have absolutely the best sound you can get - it need only take ten or 15 minutes, and can make or break your guitar part. Also, remember that you have some choices to make when it comes to pickup pattern. If you want a close-mic sound and room ambience, think about using omni-directional instead of the standard cardioid.

You can also experiment with multiple mics too. Try using one at the hole for warmth and another at the neck for brightness. Alternatively, try a couple of mics placed centrally, pointing towards opposite ends of the guitar body - these signals can later be panned for a stereo effect.