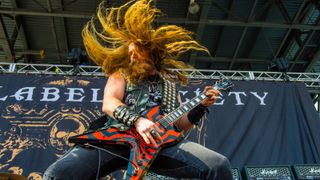 Zakk's note choice is rooted in blues and country music, so the major and minor pentatonics and the blues scale feature heavily in his playing.

Whether he is playing bone-crushing riffs or shredding the proverbial out of the strings, Zakk always delivers his parts with a fast and ferocious picking technique most likely inspired by the classically influenced playing of original Ozzy guitarist Randy Rhoads.

Zakk has an awesome wide vibrato and a variety of trademark harmonic and tapping techniques, and he is also noted for the his aggressive pinched harmonic squeals, often mixing them into heavy palm-muted riffs to add high frequency contrast to the low-end crunch.

Pick the 5th fret D with a downstroke and touch the string with the side of your thumb at the same time to produce the harmonic. Generate wide vibrato by bending aggressively.

Use palm-muted alternate picking here. Focus on picking four notes on the third string and two notes on the fourth string; start each new string with a downstroke.

Pre-bend the 11th fret third string up a tone and let the first three notes of the lick ring together to form an E major triad before bending the string down and up again.

Use pick and fingerstyle hybrid picking to play the arpeggios, using the pick for the third string and your second and third fingers for the second and first strings respectively.

This lick is based in the E minor pentatonic scale (E G A B D) and shifts through five scale shapes.

Try playing the lick using pull-offs if picking every note is a challenge. Notice the picking and fretting pattern is the same in bars 1 to 3, but switches to a two-notes-per-string pattern in bar 4.

Bend the third string up a tone and as the note is sustaining use your pick-hand second finger to tap the 12th fret. The string is already bent, so this note should be A instead of G.

Use hammer-ons to ascend the initial run then pause on the 7th fret. As the note rings, touch the string over the 19th fret to sound a harmonic an octave above the fretted note.