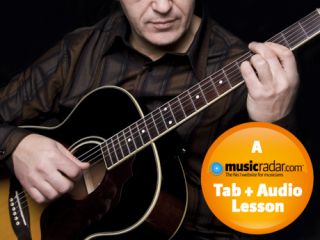 In this series of tab and audio lessons, Guitar Techniques magazine's Stuart Ryan takes you through a gigantic acoustic method for playing fingerstyle blues. This is part two of the series - check out lesson number one here.

In the first lesson of this series, we looked at some examples in DADGAD tuning - but of course, not all blues is in alternative tunings. Here's something in standard to keep you busy.

Standard tuning uses all those familiar shapes we know and love - especially around the first few frets - and by looking at photos of the old-time players we can often tell whether they are in standard or alternative tuning.

This exercise does not feature an alternating bass line but there is plenty of detail on the higher strings to keep you busy. Look out for the shifting notes in the double-stops and those notes in bar two which are sustained over the beat.

In the third bar you will hear a familiar idea and further on there are more double-stops and quarter notes bends to contend with - all with those bass notes thumping out underneath!

The final four bars feature a Robert Johnson-style turnaround complete with dominant 7th chords which can be strummed or plucked with a pima combination and some gospel style chord inversions.