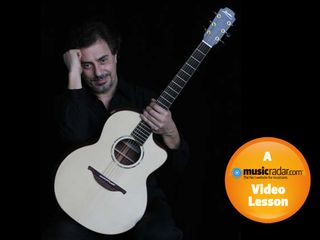 Without a shadow of a doubt, Pierre Bensusan is a 24-carat gold master on the world fingerstyle scene. Pierre is now so adept at DADGAD tuning that he has adopted it as an 'alternate standard tuning', basing his playing and composing style completely around it.

To become a DADGAD specialist to the extent that Bensusan has taken it would demand years of dedication, but you can hear in his playing how unique a voice this tuning gives him.

And you don't have to be a player of Pierre's incredible calibre to enjoy the fruits of DADGAD yourself, whether as an alternative to regular tuning or indeed as a tool to kick-start your songwriting - a use that over the years it has often been put to - with great success.

Bensusan's writing draws influences from many different styles of music-jazz, world and especially Celtic/folk. Born in Oran, French Algeria in 1957, he grew up in Paris and came to prominence at the startlingly young age of 17 when his debut album Presde Paris won the Grand Prix Du Disques at the Montreaux Festival in Switzerland.

Since then he has gone on to be viewed as a member of the A-list on the world acoustic guitar scene. Bensusan's guitar style takes on the elements mentioned above and features some tricky hallmarks: in his Celtic playing, for example, you will hear florid melody lines juxtaposed against solid thumping bass strings which can be a real challenge to maintain.

Many of his own compositions feature free-flowing sections which push and pull the timing and again offer a challenge to perform. Like a jazz player, Bensusan can be quite free in his playing (though always with a sense of where the pulse is) so sometimes it is best to relax and go for it, one of the aspects of playing solo that can really set you free.

For this study, we've taken onboard some of the Bensusan traits: beautiful, rich chord voicings that really showcase the chordal possibilities of this tuning and long, flowing melodic lines that almost feel more like a guitar solo than a fingerstyle composition.

If you're getting into DADGAD or looking to expand your DADGAD playing further, then time spent with Bensusan's pieces and recordings will really give you a sense of what can be achieved in this tuning.

[Bar 1] These long flowing lines are quite typical of Bensusan's playing and sometimes have quite an improvisational feel to them. This kind of exercise is great for getting your playing to be as clean as possible, so keep strings ringing and make hammer-ons/pull -offs super smooth.

[Bar 7] This chord may feel a little awkward. Some of Bensusan's more outlandish voicings will require a Herculean stretch so always make sure you've warmed up your hands first before stressing them.

[Bar 11] Often fingerstyle music contains subtleties which can be overlooked - eg here you have the hammer-ons and pull-offs played against a sustained chord, something you will come across in the playing of Bensusan and many others.

[Bar 17] Another long flowing line, this time one which travels up on one string - a good exercise for orientating yourself with DADGAD (or any tuning for that matter) is to play scales up and down one string, so you think more like a sax player with this process and you can visualise intervallic leaps more readily...

[Bar 28] Arpeggiated chords are the hallmark of any fingerstyle guitarist, so make sure you can pick passages such as these cleanly and in time, always getting from one chord to the next smoothly.