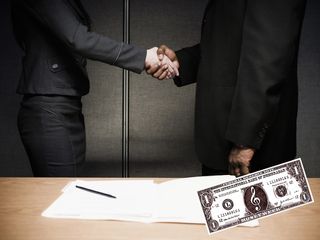 Even if you're creating all your music entirely alone, the chances are that sooner or later you'll need someone's help to move forward and get it released. And that means making a contract. The good news is that putting a legally binding, recognised agreement in place is easier than you think.

A contract is, purely and simply, an arrangement between two or more people to get something done. As such, it acts as a permanent record as to what was done by whom and what both parties have agreed to do with any material or money resulting from their actions.

As people can be unreliable - or to put it more charitably, can become busy with other things - the purpose of a contract is to legally oblige someone to carry out a job they've agreed to do. And with (potentially) huge sums of money involved, having a contract with anyone who 'touches' your music means a happy payday at the end of the ride.

For instance, as a solo singer-songwriter, you might sign a contract with a producer which will cover things such as which tracks he's going to produce for you, how much you're going to pay him for his services and what, if any, percentage of royalties will be owed to him based on future sales of the records you make together.

Things can get complicated when you consider that every eventuality should be thought out and included in your contract. For instance, what are the implications if you decide not to release a track that has had hours of work done on it by another party? A contract might also spell out a more complex financial arrangement.

And if you are agreeing a royalty split with your producer, you need to decide, for instance, how soon the first payment will be made. Do you, as the artist, keep all royalties until the record has amassed the sum you initially spent on the production fee (this is simply called recouping) or do you pay out royalties from the first record that you sell (this is more common if the production fee is extremely low or has been waived by the producer altogether)?

How often do you pay royalties and how can the producer know you're paying the right amount? Most contracts oblige the person paying to open his or her books for a few days of every year, which means that anyone keen to establish that finances are being kept properly is allowed to browse the accounts to satisfy their curiosity or suspicion.

The important thing about any contract is to include anything that you (or your label) wants to ensure that there's no margin for misunderstanding. Any aspect of a working relationship not covered by a contract is an issue that is potentially up for grabs meaning that, if there's money involved and no one is quite sure to whom it is owed, it's off to court you go for lawyers to argue each side of the case.

If that's struck fear into your heart, don't worry. There are two bits of good news. Firstly, a contract doesn't need to be written in legal-speak. Its job is simply to prove to a court of law (if you ever get that far) that an agreement was in place for work to be undertaken and what the details of that work were. You can write these terms on the back of an envelope, five minutes before a session starts if you like; so long as there are two signatures on the 'contract', it'll be recognised as a legal document.

This means, of course, that with a little planning, you can draft a series of your own contracts which include all of the points you want to cover, which you can then tweak, amend or add to, so that they're all tailored to the specific work that you do.

The second bit of good news is that websites - including those of the Musicians' Union - include a series of downloadable 'sample' contracts, which you can use as templates to fit your own requirements and to find out what these contracts might look like, to ease your concerns. That said, it does make sense to have a good music lawyer look through contracts you might be offered or those you're drafting yourself.