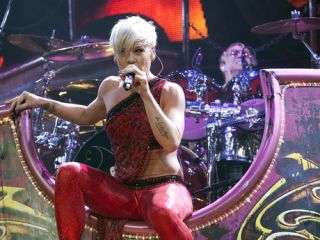 Mark Schulman's parents may have wanted him to become a classical cellist but despite conducting his Junior High School orchestra and playing in the LA Junior Philharmonic, Mark already knew he had found his calling years before. "I saw the Beatles on Ed Sullivan when I was three," Mark tells Rhythm.

"I saw Ringo and all of those screaming girls and I was like, I'm in! That's it!" Since then, Mark has held the drum seat for some of the biggest names in rock and pop, from Billy Idol and Foreigner to his current arena sell-out assignment with Pink.

He played with Tina Turner and Beyoncé at the Grammys and did a spell with Simple Minds. He's a regular face on the clinic circuit, and has released A Day In The Recording Studio - an excellent DVD which aims to give aspiring drummers some insight into the recording process.

Tip 1: Never rest on your laurels

Mark says Pink is the kind of star that only comes along once in a generation. "Alicia [Pink to the rest of us] is really, really disciplined and the only thing she demands is that everyone be as good at what they do as she is at what she does. That's a tall order because she is the most amazing performer," says Mark.

"Everybody on the tour is the same way. The people that weren't that way were let go. There were a few weak links, they were quickly identified and replaced by strong links.

"I tell my students, if you don't want this gig or can't do this gig, there are a thousand people behind you who are waiting to take that gig and will give 150 percent. I never rest on my laurels. I play harder than I did, I play with more energy, do more stick twirls, I keep advancing the drummer that I am on stage.

"The key for me has always been, 'What can I do for you?' not 'What can you do for me?'" says Mark, who believes that if you take care of the people around you, the rest will take care of itself.

"Whenever I get in a musical situation I'm very aware of how everyone else benefits and what I can do to make their life easier. It's not about me. If I can make it about everybody else then my life is taken care of, whether it's being good to your woman or to your guitar player or being the one in the band who listens because everybody else wants to talk. If you're the one who listens, people are going to dig you.

Even when we're walking to the stage I let everybody walk before me. I'm the drummer, we're the foundation that everything is built on so we're here to take care of everybody else. Even physically, where we sit we get to see everything. For me it's great, I get to see Pink's ass. She's got a great ass!"

In the early '90s Mark auditioned for Foreigner but a month after getting the nod, the phone still hadn't rung. He found out that their producer Keith Forsey had brought in drummer Tal Bergman because he already knew Tal's playing, not Mark's.

"This is the point where most people would have been disappointed and said, 'Oh, that's it.' I said no, I'm going to do something about this, I'm going to try to get to know Keith. I called him and left a message, 'Keith, this is Mark Schulman. I know you don't know me but I'm the guy who actually got the Foreigner gig. If Tal's ever not available, give me a call.'

"Sure enough three months later he calls me in a frenzy, 'Can you come do this track for Beverly Hills Cop III?' I went down and I nailed it. From that point, Keith recommended me to Billy idol when they recorded a track for the Speed soundtrack. So I met Billy and from that point on I was Billy's drummer.

"A year later when I was on a break from the Foreigner tour, Keith called me to do a track with Simple Minds. I met the guys, we got on, one track turned into a whole record, I ended up joining Simple Minds. This all stemmed from one call I made. That's how it happens. I tell people Keith Forsey bought my first house."

Next: Using the right gear and staying positive

Tip 4: Get the right gear

"Gear is all about what is musically appropriate," observes Mark. "I was going to do the pink gig with a five-piece but Mark Bennett my tech said, 'No, dude, let's build a really great kit!' Now I have five toms and 13 cymbals but I use everything. There is a musical reason for it all, it's not there just to be a prop."

"The set-up is actually two drum kits, each with a distinct sound and character. "I'm using two unique, completely independent bass drums, a 24"x16" and a 20"x20". I use them for different songs and different parts of songs so I'm not triggering anything from my acoustic drums.

"I have my Roland TD-20 for the electronics but I go between the two bass drums for a different feel," says Mark, who uses two snares, a 12"x5" Bubinga and a 14"x6.5" hammered brass snare.

"On a couple of songs, Don't Let Me Get Me and Just Like A Pill, I play the verses on the small kit, the 20" and the 12". I'm like Garibaldi for a minute, opening and closing the hats on the off-beats and then I become rock guy flipping the sticks and everything. I love it. That's what makes it exciting for me and that's why the kit I have makes a lot of sense musically rather than doing it with samples."

"You need to communicate. You need to let everybody know you exist at all times. You can't be shy about letting people know," says Mark. "You need to take compliments about your own success and have a lot of gratitude about that success.

"Everyday I wake up with gratitude that I'm still doing this. I've been in this business touring for 21 years. I never, ever take it for granted. I never get spoiled. If I get whiny I kick my own ass and say stop whining!

"What it comes down to is your attitude. I think Ben Franklin, the inventor, said, 'if you think you can do it or you think you can't do it, you're right.' I was always the guy that said there's a gig out there, someone's got to do and it might as well be me. A lot of people approach it differently: 'I'll never get this gig.' Well, if you think you're never going to get that gig - bingo!"

With just two days to learn the material and no rehearsals before his first gig with the band, Mark had to cram hard and fast. "I listened to the live DVDs to try to get Matt's nuances. Where did he change things, where did he lay back? That was my approach.

"Basically most of what I've done has been glorified Top 40 gigs because most of the time I haven't played on the records. I played on Simple Minds' record and Foreigner's record but I haven't even played on any of Pink's stuff. I'm learning either programmed parts or some other guy's parts anyway and expanding on those.