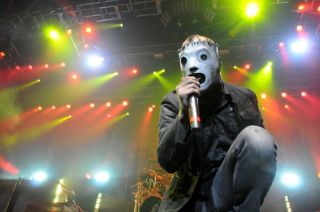 Slipknot have announced that they will be headlining Sonisphere festival in the UK this summer.

The event, due to take place 8 - 10 July in Knebworth, Hertfordshire, will be one of the band's first live shows following the much-lamented death of the group's bassist, Paul Gray, earlier this year.

The band released the following statement:

"We're looking forward to spending our summer in Europe. This tour is about us and our fans. It's about celebrating the life of our brother, Paul and his legacy. The door is neither open nor closed. This tour is about burning down that door. See you this summer."

Ticket information for the event and another announcement will be released on Monday (6 December).

In other Slipknot news, frontman Corey Taylor is a making a bid for the Christmas number one song with his own Xmas single. Stream Corey's Taylor's Xmas single.