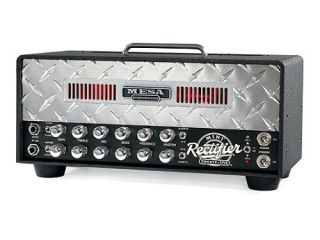 High-end US amp manufacturer Mesa/Boogie has revealed a miniature version of its flagship Dual Rectifier head, the Rectifier.

Over the last few years the world's amp producers seem to have realised that blowing your hearing in the pursuit of tone isn't necessarily high on most guitarists' to-do lists and have thus set about designing some more practice-friendly combos and heads.

Mesa/Boogie's Mini Rectifier follows hot on the heels of last year's Transatlantic series of 'lunchbox' amps and, similarly, aims to offer great tone at lower volumes, but this time apes that of it's hi-gain big bro, the Dual Rectifier.

According to Mesa, the package, which weighs in at 5.5kg, contains two EL-84 power tubes and five 12AX7 preamp tubes. Similarly to other mini-amps, the Mini Rectifier features switchable power levels, meaning players can choose between a 10-watt and 25-watt output.

In addition to the new head, Mesa/Boogie has also announced a set of Celestion-loaded mini cabs - both straight and angled - designed to compliment the Mini Rectifier.

Head to mesaboogie.com for more information and keep an eye out for the Mini Rectifier in a forthcoming issue of TG.