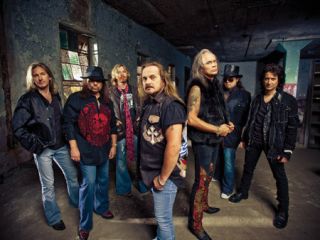 Alabama rock juggernauts Lynyrd Skynyrd are heading to the UK in 2012 for three shows in support of an as-yet-untitled new studio album.

Yeup, the people responsible for musical highlights, like 'Free Bird' (and also, sadly, filmic lowlights, like Reese Witherspoon vehicle 'Sweet Home Alabama') are heading to the UK for shows in London, Manchester and Glasgow next June.

Skynyrd have also got a new studio album on the way, which will be released on Roadrunner Records around the same time. As has been the case with pretty much every hard rock, metal, classic rock and blues album of the last two years. Except for Lou Reed and Metallica.

Tickets are on sale now and available from www.livenation.com and, for the Glasgow date, www.gigsinscotland.com.