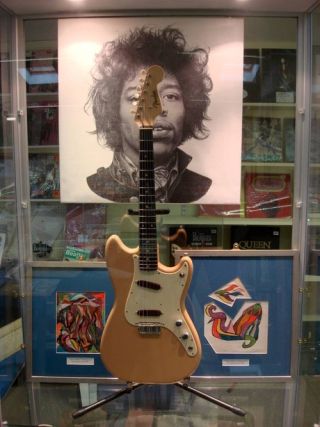 The guitar Hendrix played before he was famous goes up for auction next month. Does anyone have a spare $180,000 tucked under their mattress?

That's how much the Fender Duo-Sonic Jimi played on tour with the Isley Brothers is expected to fetch.

Of course, as a solo artist, Jimi was known primarily as a Strat man, which explains why this Fender went into storage before reappearing in Hendrix manager Chas Chandler's studio.

Chandler sold the guitar in 1982 for £400 to music agent and manager Rod Weinberg.

The Duo-Sonic goes under the hammer at Cameo Auctioneers Records' Music & Memorabilia Auction on November 2.

Check out these shots, including some original artwork by Jimi, courtesy of Small World News Service.