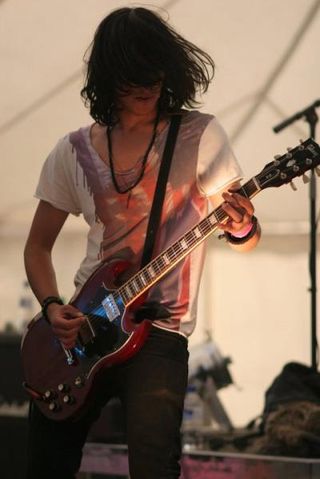 Neelesh Vasistha returns to talk about his experiences on the Guitar Higher Diploma course at The Institute. For the last few years TG has sponsored a scholarship at The Institute (formerly ICMP and The Guitar Institute), one of the leading contemporary music schools in the country...

A year in closing. The gloomy refraction period after the Christmas orgasm lends itself to sober reflection. I sit surrounded by wrapping paper and unmet gift expectations, imagining a camera slowly panning out on me as I contemplate the year gone by.

Although my feelings towards the ICMP as a graduate are mixed, one particular concept of the 'urban musical whore' has definitely proved thoughtful. This involves moving away from the classic 'monogamous' approach of being a one-band-only rock guitarist. It may be less rock 'n roll, but the chances of winding up in a band catapulting towards stardom and being the next Joe Perry are minimal.

The music business currently could be described by a number of negative adjectives and none could argue that 'fickle' isn't one of them. The amount of projects I've been in which for whatever reason have dissolved beneath my feet is sobering.

As a London based guitarist, 2012 has taught me to get my fingers in all sorts of warm and creamy musical pies in this thriving city. Not just to open up more avenues for potential success, but to broaden musical horizons by playing with artists and genres out of my comfort zone. I'm far from a preacher. I'm still putting this theory into practice, and so should you.

2013, despite it's visual asymmetry and inclusion of a starkly unlucky number, looks to be promising. With Rufio a summer tour is being planned with öffbeat, a trendy East London events organiser. This and a planned visit to the studio in Spring means that the wheels are definitely in motion for a productive (wishful thinking to say 'breakthrough'?) new year. On top of that, and in keeping with the delightful pie analogy made earlier is a very exciting new project which I can't wait to tell you about! Happy New Year!