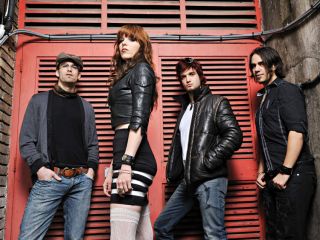 Following a successful run of dates in support of Shinedown earlier this year, Pennsylvania four-piece Halestorm are heading back to the UK for a headline tour this September.

If you can't wait until then, frontwoman Lzzy Hale and company will also be over for Download festival (9 June) and they've been cherry-picked as the main support for Slash's London date at the Hammersmith Apollo (6 June).

The group released their second album The Strange Case Of… earlier this month (9 April) and back in February had a song (Here's To Us) featured on US musical comedy juggernaut Glee.

Whether or not that floats your boat, it's the sign of a band that's becoming a bona fide big deal stateside, so you should snap up the chance to see them in a small venue before they start with all the limos and personal bodyguards.

The full list of Halestorm tour dates is below and tickets are on sale now from Ticketmaster.co.uk.