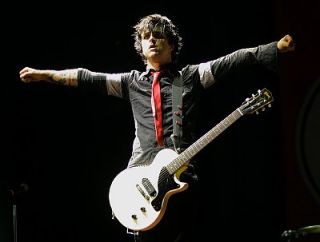 Green Day have posted a video trailer for up-coming release, ¡UNO! and have also confirmed the release date for ¡UNO! as September 25th.

The video (which you can see below) is for the first of the band's triple-headed follow-up to 2009's '21st Century Breakdown', entitled ¡UNO!, ¡DOS! and ¡TRE! respectively.

It features footage of the band playing a stomping surf-tinged groove, with Billie Joe Armstrong displaying some funky chops and vibrato wobblery with his Bigsby-equipped Gretsch.

Green Day entered the studio earlier this year, announcing in April that there will be three releases in September, November and January. The band has been posting video updates from the studio ever since, to see the collection click here.