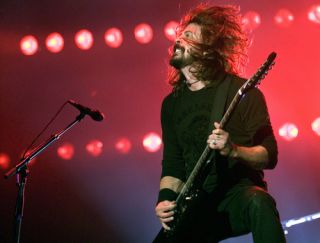 Guitarist Chris Shiflett has revealed that the Foo Fighters' new album is currently being put together in the rehearsal studio, with the band starting the latest practice sessions for the follow-up to 2007's 'Echoes, Silence, Patience & Grace' today.

We spoke to Shiflett about his band's newly released, self-titled album, 'Chris Shiflett & The Dead Peasants', and we couldn't resist asking him a couple of questions about his day job in the Foos, too…

"We're supposed to start really recording at the beginning of September," says Chris. "We did about a week and a half of rehearsals already, we're about to do another week or so starting tomorrow, then we have a couple more weeks of rehearsals and demos starting in August. Then in September we'll start recording it for real."

Dave Grohl has already stated that he intends the new album - which will be produced by Nirvana's Nevermind producer Butch Vig - to be "the heaviest yet" and according to Chris, this is looking likely. "We've done about 9 or 10 songs so far - it's all really rocking! I think that's where Dave's songwriting is right now. He wants to make a rocking record, so that's what it'll be."

Keep your eyes peeled for our full interview with Chris in a forthcoming issue of Total Guitar.