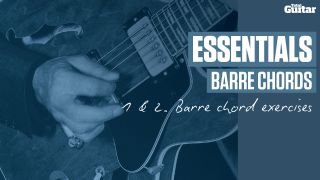 Barre chords have a reputation as a finger-busting technique because of the strength required to play them, but don't let that put you off.

Pick up Total Guitar issue 221 (on sale 31 October to 27 November) for the accompanying tab and explanation.

Example One and Two: Barre chords across the neck/Chord change exercise

In addition to at least four full tabs of classic and contemporary songs from your favourite artists, every issue of TG features a selection of guest lessons from pro players and a Riff Of The Month video lesson for the more visually orientated learners among you.

Each issue also includes the story behind the songs, clearly explained amp and effects settings and backing tracks for all of our lessons. See below for more information.

Read it!
Every song has a story. Where possible we speak to the musicians and/or studio technicians to explore the inspiration, as well as the writing and recording processes behind your favourite songs.