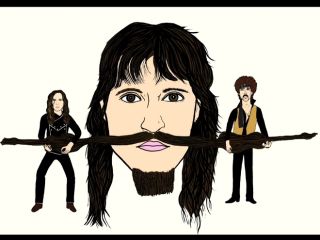 Lowestoft's finest cat-suited cock-rockers The Darkness have unveiled a brand new track titled 'Nothing's Gonna Stop Us' through their website. Check out the rather brilliant video above and head to www.theactualdarkness.com to download it for free.

The band have been hard at work on their as-yet-untitled third album, the follow-up to 2005's 'One Way Ticket To Hell… And Back', for nearly a year. In fact, when TG spoke to frontman Justin Hawkins back in August last year, he reckoned that the album was nearly done.

"To use one analogy, the house is built," he told TG. "And it's a lovely house. How we decorate it is the next conundrum. We're getting to the stage where it's like, how much do we want to blow it?"

Recently, Hawkins told Billboard that we could see the album as soon as next month, a claim the emergence of this latest track would seem to support.