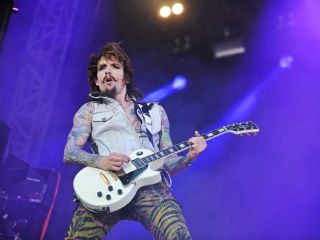 "To use one analogy, the house is built," he tells TG, in part of an exclusive interview for issue 218. "And it's a lovely house. How we decorate it is the next conundrum. We're getting to the stage where it's like, how much do we want to blow it?

After the Lowestoft rockers' messy split in 2006, the announcement in March of a Download set and new album were unexpected twists.

"Download was a similar feeling to the whistle going and you've won the final," says guitarist Dan Hawkins. "We have scored a few own-goals along the way, though…"

Material for the as-yet-untitled album was rehearsed in their Lowestoft hometown and recorded at Dan's home studio.

"Home is where the heart is," says Justin. "When you write songs, you need a grounding to set the stories in. There's a lot about small-town life. The album has songs about stuff that's happened to us in the town. [As for influences], it's AC/DC, Queen, Aerosmith, et cetera."

The gear used on the album also has a back-to-basics vibe. "For us, right now, it's Les Pauls and Marshall Super Leads," says Justin. "We lined up all the amps we had - Mesas, Cornfords - but Marshall is the homecoming sound."

"There are some interesting wah sounds, and we made a point of ditching all that click track sh**, because rock music needs to breathe. It's party music. With something like 'Cannonball', every single part of the song is a riff!"

Nor should fans of the pair's duelling solos be disappointed. "My instinct is to go 'Solo! Let's have a bit of showing off!'" says Justin. "There's a lot of lead work on it, to be honest…"

Check out Total Guitar issue 218 (on sale in the UK from 5 August to 1 September) for a full interview with Dan and Justin Hawkins.