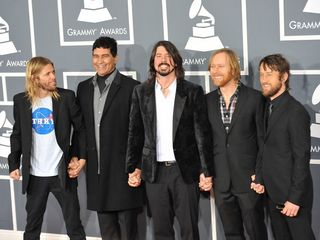 Foo Fighters scooped no less than five awards at last night's 54th Grammys. However, it was Dave Grohl's acceptance speech for Best Rock Album, reminding the crowd of the importance of music's "human element", that brought about a standing ovation.

Check out an abridged version (we took out some of the record company back-slapping) of Grohl's Best Rock Album rallying call below.

"This is a great honour, because this record was a special record for our band. Rather than go to the best studio in the world down the street in Hollywood and rather than use all of the fanciest computers that money can buy, we made this one in my garage with some microphones and a tape machine...

"To me this award means a lot because it shows that the human element of music is what's important. Singing into a microphone and learning to play an instrument and learning to do your craft, that's the most important thing for people to do.

If Dave's got you inspired, you can learn one of the best riffs from 'Wasting Light' in our 'Rope' video lesson.