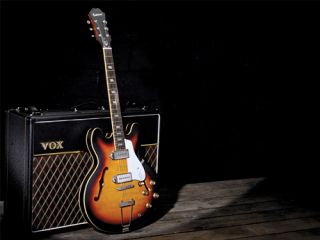 The roots of John Lennon's guitar sound are centred around products by Epiphone and Vox and you can win an Epiphone Inspired By Casino guitar and Vox AC30 Custom amp in our latest competition.

First is the Epiphone Casino, the hollow body electric that John used as his main guitar from 'Revolver' until the end of The Beatles' career. John's Casino was a 1965 model, equipped with a pair of 'dog-ear' shaped P90 pickups, parallelogram inlays and trapeze tailpiece.

Vox amps played just as big a part in John's sound. The Beatles had an endorsement deal with the company from their early days, and used its amps almost exclusively for most of their career. The AC30 is without doubt not only Vox's most famous model, but one of the most revered amplifiers in guitar history.

Thanks to both Epiphone (www.epiphone.com) and Vox (www.voxamps.com), we're giving away a Lennon-inspired rig consisting of an Epiphone Inspired By John Lennon Casino and Vox AC30 Custom.

For your chance to win, just head to www.futurecomps.co.uk/tg209lennon and answer the question below correctly.

What was the name of John Lennon's pre-Beatles band?

The Stonemasons
The Coal Miners
The Quarrymen

PLEASE NOTE: Under 18s must obtain parental consent to enter this competition and be able to demonstrate this to Total Guitar's reasonable satisfaction.