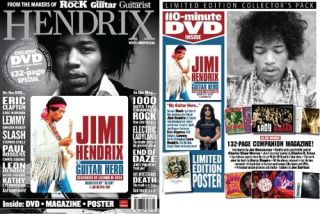 Produced and directed by celebrated music movie pro Jon Brewer, 'Jimi Hendrix: Guitar Hero' is the definitive study upon Hendrix's unique impact on the rock music scene and his legacy by those who were there and those who are still influenced by him today.

This critically acclaimed masterpiece study of Hendrix and his music was selected in the Critics Choice of the Week in the Sunday Times prestigious Culture section when a heavily edited 50 minute version was screened on BBC in early September.

This is the first time that this 90 minute version has been made commercially available. Narrated by modern day guitar icon Slash the film also features contributions from, among others; Eric Clapton, Jack Bruce, Mick Taylor, Lemmy, Stephen Stills and Leon Hendrix.

The deluxe magazine is the ultimate companion guide to the film and is edited by rock writing legend Mick Wall whose recent works include the award winning 'When Giants walked the Earth: The unofficial story of Led Zeppelin'.

The magazine charts the rise of Jimi Hendrix and draws upon many first hand accounts to create a definitive account from those who were there.