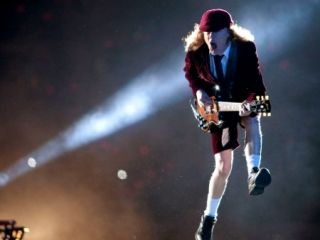 Australian rockers, school uniform aficionados and quite possibly the biggest band in the world, AC/DC, have leaked information on a new DVD release, 'Live At The River Plate', due 9 May.

The film will document their December 2009 shows in Buenos Aires, Argentina, in which the band played to a total of 195,000 enraptured fans over three nights at the River Plate stadium. Making for some of the liveliest shows of AC/DC's two year world tour in support of 'Black Ice', some of the footage from the shows was also used in last year's 'Shoot To Thrill' promo for 'Iron Man 2' (see below).

Fan site AC/DCzone.com is reporting that the concert film will be directed by David Mallet, who has a long history with the band and has been filming them since their 1986 release 'Who Made Who'.

Along with performances from across the three nights, the live DVD will include a bonus featurette entitled 'The Fan, The Roadie, The Guitar Tech & The Meat', which will follow some of the band's backstage crew during the Buenos Aires gigs.