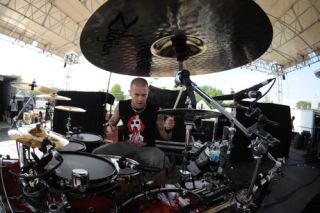 Will Hunt has just checked in with us as he looks ahead to a year which is shaping up to be as unbelievably busy as the one that has just passed.

Not content with commitments with Black Label Society and Evanescence in the coming year, he's also started a new project.

Will explained: "I'm working with a new band called Eye Empire and there's a debut CD coming out for that. It's a kick ass band. It's a side thing for me now but we'll see where it goes."

Of course, he'll also be back on the road with Zakk and co next month, and there's also movement in the Evanescence camp.

"The Evanescence thing is still going to happen, it's just a matter of when. We're still in this writing process that hasn't really stopped. In between tours I've been doing a lot of writing with them. I'm just taking that as it comes. Ideally it would be great to be in the studio in the break from Black Label in the beginning of April, that would be wonderful. We'll see."