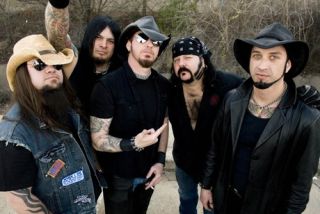 We're always scouring eBay for the latest drum goodies and oddities, but we may be about to get more than we bargained for courtesy of Hell Yeah's Vinnie Paul.

The larger-than-life drum legend has told Decibel that he could be about to sell his toilet over the web. It's not quite as weird as it sounds though, as it seems that the toilets are new. Ok, it's still pretty weird...

He said: "I'm seriously thinking about putting my toilets up there [eBay]. My new house I bought in Vegas, I didn't like the toilets it came with. They were kinda old-school and small and had those wooden seat caps, so I replaced 'em all. And now I've got three toilets from my house in Vegas that I'm about to throw on eBay."

Vinnie is of course no stranger to selling his bits and bobs online, having flogged an old oven and his first cell phone on eBay.

Which piece of rock star paraphernalia would you most like to see up for grabs on eBay? Roger Taylor's electric blanket? Tre Cool's fridge-freezer? Steve Gadd's chaise longue? Let us know what you shell out for.