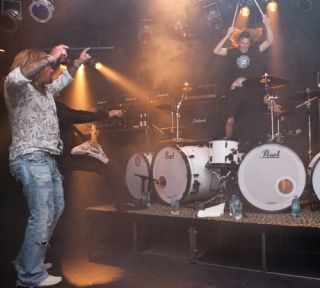 Remember a few weeks back we put together our list of the world's most exuberant drummers? Well, it seems that we did Vince Neil sticksman Zoltan Chaney a huge disservice by leaving him off the list.

Take a look at this drum cam clip of Zoltan tearing up Mötley Crüe classic 'Live Wire' at a recent show.

Of course, Zoltan has some pretty big shoes to fill when it comes to pulling off Mötley tracks, as you can see from the video below.

You can hear Zoltan's exuberant playing on Vince Neil's new solo album - Tattoos and Tequilla (he's obviously moved on from just sex, drugs and rock 'n' roll), which is out now.