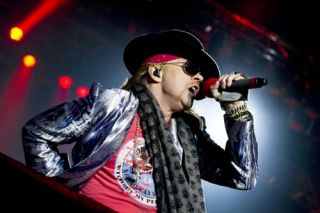 The world has gone Guns N' Roses crazy this year. Again. Slash has released one of the records of the year, Axl has infuriated audiences all over the world with his typically dodgy timekeeping and Steven Adler has got back on the scene with the resurrection of Adler's Appetite.

This week marks the return of Axl's GN'R to the UK for a batch of arena dates. Say what you like about Axl (and plenty do), but he's surrounded himself with some awesome drummers over the years. Just take a look at this lot…

The birth of a monster. 1987 saw the release of GN'R's ridiculously huge Appetite For Destruction, and here we saw the 'most dangerous band in the world' in full flow, with Steven Adler behind the kit. Adler's punk chops were a huge part of the band's early sneeringly aggressive style. Unfortunately for Adler, his time with Axl and co came to an end amid a blur of arguments and addiction while recording the Use Your Illusion albums.

Enter former The Cult drummer Matt Sorum. The poodle-permed rocker got to grips with Use Your Illusion and soon found himself in the biggest band on the planet, and in the middle of a punishing 28-month world tour. While Adler brought the punk attitude to the table, Sorum's tenure was epitomised by rock steady, hard as hell beats.

After a lengthy hiatus Sorum made his exit and in came session ace, and all-round drum legend, Josh Freese. Despite being in the band for more than a year, Freese was criminally underused by the Gunners. He put down the beats for a handful of tracks that would eventually find their way onto Chinese Democracy, and Arnie movie soundtrack tune 'Oh My God'.

At the turn of the millennium, out went Freese, in came Bryan 'Brain' Mantia. The former Primus sticksman brought all kinds of jaw-dropping muso chops with him, but again he was left spending more time twiddling his thumbs that smashing up the kit in his six years with GN'R.

The latest incumbent to the revolving GN'R drumstool, Frank Ferrer first sat behind the kit for Axl's band of merry men in 2006 and since then the band have been uncharacteristically (by their standards) busy, even managing to release an album - the much-delayed and unbelievably underwhelming Chinese Democracy.