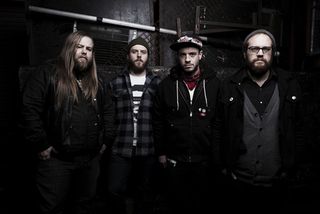 Ask anyone who caught Cancer Bats' blistering set at Download over the weekend and they'll tell you that their ear-shredding version of Beastie Boys classic 'Sabotage' was a highlight of the weekend.

Devised initially as a way to give something back to fans as the band came to the end of their touring cycle, the track soon took on a life of its own, making it's way onto the Bats' storming new album. In honour of this fist-pumpin' re-imagining, we caught up with Cancer Bats drummer Mike Peters to find out his favourite cover versions.

"I like it when it's a totally different version. I'm not a fan of those hardcore goes pop kind of things, but things like Johnny Cash did 'Rusty Cage' by Soundgarden. It's incredible. The breakdown is almost heavier on an acoustic than it was in the original. It just sounds so thick."

"Slayer did the Undisputed Attitude record and they did 'Violent Pacification' the DRI song, which is one of my favourite DRI songs."

"Then there's also Ryan Adams, who I've recently become a big fan of. He does an amazing cover of 'Wonderwall'. What I've heard is that Oasis started playing 'Wonderwall' more like the Ryan Adams version than the original. Which is kinda cool."

"Rage Against The Machine's cover of 'In My Eyes' by Minor Threat is another. That's a really cool one. Brad Wilk's drumming brings that Rage groove to the song. Minor Threat's version is so urgent and fast and then Rage take it to their groove."

You can catch Cancer Bats later this year as they blast through the UK with a headlining tour which kicks off in Folkestone on 27 October.