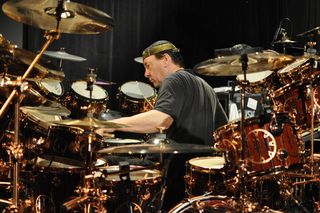 "Yesterday Hudson Music's Joe Bergamini began his story of putting together the mammoth Taking Center Stage DVD with Rush drummer Neil Peart. Today he continues his journey, and it starts with him coming face to face with his drum hero.

"On July 12, 2008, Rob Wallis and I met up in the early afternoon outside of the PNC Bank Arts Center in Holmdel, New Jersey. I had seen Rush in concert there several times, and had always dreamed of going backstage to meet Neil. Now that day had arrived, but it was not some autograph session. I was nervous. When it came right down to it, I started to feel that it would be much easier to just remain an admirer from afar, given what I thought Neil's reaction would be like when he met someone like me, who was such a fan of his work. Finally the appointed time came, and we were ushered into (of all places) Neil's bus. Rob went in first, and I nervously ascended the steps and stood just inside the door. To Neil, of course, it was just another day at work, and he emerged from the back of the bus wearing a baseball hat, and gave Rob a hug. My nervousness was increased by seeing how tall and heavily built he is in person. Rob introduced us and I shook Neil's hand, and to my surprise, he mentioned a couple of things that he knew about me (I guess Paul and Rob had told him), and the name of a mutual friend at Sabian, Chris Stankee, and smiled."

"After catching up with Rob for a while, and chatting with me a little, Neil invited us onto the stage to watch the soundcheck. I was beyond excited. As he led us to the backstage area and over to his drum set, I looked around and remembered walking into Madison Square Garden with my father in 1984 (my very first rock concert), at thirteen years old. Our seats were the absolute worst, in the top row of the arena, but I was transfixed by looking down at the beautiful red drums and gleaming cymbals.

"Then Neil was suddenly motioning to me to climb up on the riser and take a seat on his drum throne. He walked around the kit and gave me a guided tour of the intricacies of his setup, we talked a little shop, and I was in heaven! Rob, knowing the significance of the occasion for me, walked around the kit and took photos of me with Neil. Soon Alex and Geddy emerged, and I asked Neil if I could stand behind him and watch him play the soundcheck, and he agreed. As I stood there watching him, I don't think my smile could have been any bigger.

"As I watched the concert that evening, observing Neil playing some of my favourite songs once again, I saw him in an entirely different light. This day was a dream come true, something I will remember for the rest of my life. On the way home, my overriding feeling was a tremendous amount of gratitude to Rob and Paul for trusting me enough to bring me into this, and to Neil, who turned out to be gracious, charming, and friendly. If the whole story had ended there, I would have considered myself a really lucky guy. But after the soundcheck, as we said goodbye (although we had not talked about the project at all, interestingly), Neil shook my hand and said, 'I'm looking forward to working with you.' All along this entire process, I had tons of questions for Rob and Paul about whether they thought things were going well. As we walked back to our cars that evening, Rob told me that he felt really good about how things were proceeding."

"The months came and went, our lives went on, Hudson put out a bunch of other products, and then suddenly, just as I began to assume this whole Neil project was probably never going to happen, Paul and Rob notified me that Neil was coming to New York to play in a Buddy Rich tribute concert (along with Chad Smith, Terry Bozzio, Tommy Igoe, John Blackwell, and others), and that he would make time to meet us for breakfast. On October 19, 2008, Paul and Rob and I met Neil at his hotel, and this time the agenda was to start hammering out the project. Neil had obviously spent time with my outline, but was not feeling enthusiastic about revisiting the older material. He respected my ideas, but explained that re-examining the past like that just wasn't interesting to him. In retrospect, my outline was wildly detailed, containing rare songs that he had not played for over ten years, and would have required a massive amount of research on his part into his past work. As we all poked at the remains of our pancakes, I began to feel the possibility of the project slipping away right there.

"But another idea I had generated did catch Neil's interest. It was based around his own writing about the song 'Far Cry', naming many of his influences on that drum part. I had called that theme 'Connections', with the aim of using that song to explore the eclectic nature of Neil's drumming influences. As we continued to brainstorm, Neil agreed that he wanted to try to keep tweaking ideas until we nailed something that inspired him."

"Following this meeting, we engaged in email exchanges over the course of several months, and Neil came up with the idea of basing the DVD on live performance. His first DVD, A Work in Progress, was about writing and recording the drum parts for a record. His second DVD, Anatomy of a Drum Solo, was about soloing. Neil thought the third DVD could cover the entire enterprise of preparing for a tour, and performing live: another area for which Neil is well known. In discussing live performance, we would need to show live performance, and that meant Rush songs we would have the opportunity to discuss the details of his drum parts after all!

"So we finally had it: a concept that would tie together my desire to get into the nuts and bolts, with something that was intellectually engaging and worthwhile to Neil. Only a few more dozen hours of tweaking the outline, and we would be in business!"

For more on Taking Center Stage, including how you can win a copy signed by Neil plus other Peart goodies, look out for the November issue of Rhythm. Check back here tomorrow for part three of Joe's story.