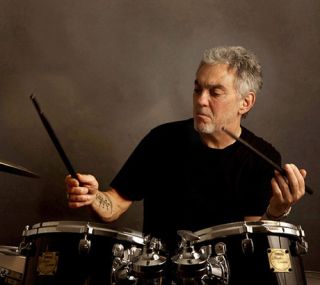 Some musicians enjoy a nice long break between gigs, putting their feet up and enjoying spending their latest pay cheque. Others, can't sit still and are straight back out on the road. Steve Gadd falls very much in the latter category.

Fresh from his Mission From Gadd European clinic tour, which itself were sandwiched between a lengthy run of dates with Eric Clapton and recording with The Gaddabouts, the legendary sticksman is heading back to the UK next month.

This time Gadd will be over here with Mike Mainieri, Tony Levin, Dave Spinozza and Warren Bernhardt - collectively known as L'image. Originally formed back in the '70s, the band slipped under the radar as Gadd and co went on to achieve monumental session success, but now they're back!

You can catch them at Ronnie Scott's on 8-10 November, and there's also an album in the works. Looks like Steve will have to wait a little longer for that well earned rest.