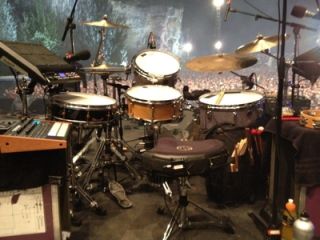 Fresh from a spell on the road tech-ing for Stevie Wonder's percussive duo Munyungo Jackson and Roland Garcia, London Drum Company owner Simon Jayes has been hard at work with Radiohead (you can see drummer Philip Selway's set-up above).

Simon comments: "To be involved with Radiohead is an incredible privilege. Being a fan of the band for a long time and then having the opportunity to work with them is a true blessing. The tour continues to be as successful as ever and the band perform to tens of thousands every night. If you've not seen Radiohead live, you should as the show is something to behold. Hours of work goes in to the production every day and delivers amazing results night after night."

Simon admits though that the gig is a bittersweet experience due to he tragic passing of the band's tech Scott Johnson earlier this year.

"It is of course with absolute regret and genuine sadness that I have joined this incredible crew. It is under the worst circumstances imaginable. To step in to the massive void left by the death of my friend Scott Johnson is something that I will never really be able to fully explain in words. Scott was an amazing guy, always positive, always good company and someone I always had time for. He was a very, very good drum tech - something that is not as common as you may think - someone who I would have put up for anything I could not have done myself. I covered for Scott a few times on various gigs including his main stay, Keane.

"Stepping in for someone gives you an insight in to how they work as you are in effect 'holding the reigns' for them until their return. Needless to say Scott always had everything set up so well, he really was good at his job.

"I miss my friend and I am not alone in this. He is thought about daily by everyone on this tour and rightfully so. He made a big impact whilst he was part of the group and will long stay in the memory of everyone involved."

Simon added that the gig is a humbling experience.

"To see how the guys who were in Toronto that day have carried on not just at work but in life through unimaginable emotional strain is humbling and inspirational. As happy as I am to be here I also wish whole heartedly I was not and that my friend Scott was picking up the phone to call me and tell me how things were going."