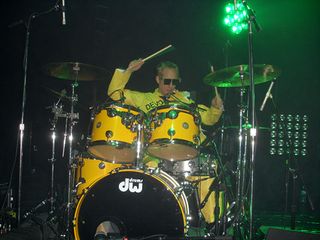 This month is Session Month here at Rhythm, with all kinds of hints, tips and insights into the session world coming from some of its biggest stars. So what better way to kick things off than with an interview with Josh Freese?

In a career spanning across four decades Freese has proved himself as a drumming chameleon, performing with everyone from Nine Inch Nails to Sting. When we caught up with him we wanted to know all about his eye-wateringly impressive session CV.

How and when did you land your first big studio gig?

"Well, the first few records I made were with artists I was already involved in (bands I was in.) Those two records were Dweezil Zappa's Confessions and The Vandals Fear Of A Punk Planet. One of the first records that I was called out of the blue to make were either Suicidal Tendencies The Art Of Rebellion or School Of Fish Human Cannonball. It was an exciting time for me. I think word was getting around L.A. that I was capable, good, willing and easy to get along with so when people were stuck in the studio and/or without a drummer I started getting called."

What was your first studio experience like and what lessons did you learn from it?

"I can't remember which one was officially my first experience but I do remember early on being in the studio and just not wanting to mess up! I tried to lock in with that click as best as I could and was afraid of being that guy that needed 15 takes. My earliest memory was probably around 1986. I was 13 and I was recording stuff with an engineer friend of mine that I still work with a lot today named Tom Weir."

Do you have a checklist when preparing for each session?

"Not really. As long as I know that I'm bringing a nice kit there with some extra snares and extra cymbals I don't really need anything else. Other than that I always try to be rested and ready to roll. If I made out any charts to the songs ahead of time (that is if producer or artist emailed me and MP3 to listen to) then I obviously bring those with me as well."

How much gear knowledge is needed?

"In terms of being able to know the right gear and sound for particular tracks/artists and being able to get that sound quickly in the studio - a fair amount. I may have thought about it a lot more when I was younger but these days with all my experience I just try to use my best judgement for each session. It's rare that I'm getting hired to do something really different than I usually do so it's not like I'm bringing tons of weird drums and gear to most of my sessions."

How important is it to be able to record at home in this day and age?

"I have a studio near my home that I'm just getting up and running now. I think having a place to create is very important. Whether it's in your garage, in the corner of your bedroom or at separate facility away from your home. I'm really looking forward to be able to do sessions from my own place. You know, have people email me Pro-Tools files and I can knock 'em out on my own time and send the band/artist/producer back 3 or 4 good takes with lots of different options. They can then go and "create their own take" if they'd like. At least they'll have that option."

What percentage of the sessions you do are played to a click. Any tips for improving at click playing?

"About 98% of the sessions I do are with a click. Just practicing to a click or metronome is a great way to practice playing with one. Sometimes it can be more fun to practice to adrum machine then just a plain and simple click track. You can program an interesting percussion 4 bar loop or even a 1 or 2 bar loop and then just practice locking in with that. It's more like you're getting to play with a percussionist that has perfect time and less like just a boring old metronome."

How much interaction do you have with the artist in a studio situation?

"That changes from session to session. A lot of sessions I do the artist isn't even there! It'll be just me and the producer cutting drums to a Pro-Tools session. Other times the artist is very involved and sitting with me discussing and working on the drums with me. Both happen often."

Can a lack of freedom ever become frustrating?

"Once again, it varies from session to session. Every different way it could go down does! It changes day to day. One day someone may want me to play exactly like the programmed drums (or the previous drummers parts) and the next day they're saying, "Do what Josh Freese would do. Play whatever you want!" Within reason of course. When there's no freedom on sessions it can be frustrating but I've come to almost expect it on certain sessions so I don't get to let down in those situations."

Which have been your most memorable and most difficult sessions to date?

"Most memorable were probably both sessions with Paul Westerberg at two different times. Paul's my favourite singer/songwriter and there were two different times where we were tracking with Paul on guitar and producer Brendan O'Brien on bass. Another one was Paul on guitar and producer Don Was on bass. Both those situations I remember looking around and thinking, "Man, you're keeping pretty good company." I felt really good about where I was and what I was doing. I've had some difficult ones (luckily not too many) as well. There's been a few where the artist thinks they know what they want or what they're talking about but they really don't. They can be telling you do something and when you do it they say, "no, no....it's all wrong!" Or when I've had people want me to play exactly what the programmed drums are doing and if you miss one little open hi-hat hit somewhere they wave their hands, make you stop and start from the beginning. That's the worst!"

How important is personality in this industry?

"It's important but only to a degree. Meaning, you can be a nice a guy and not a good player but you won't get many gigs. Also, you can be a great player and total jerk and people aren't going to want to work with you a whole lot. I'll tell you a good story that says a lot. One of my favourite musicians in the world is Jaco Pastorius. I was watching YouTube footage of him recently where he did an interview not too long before he died. I think it was an instructional video type thing. Anyhow, the interviewer says something like, "Jaco, you've really revolutionized the electric bass and you're such an innovator and everyone's going around trying to cop your style. What do you have to say about that?" And you know what his response is? He laughs and says, "Give me a gig!" And he's not really kidding. Because at that point he had become so difficult to work with or to be around that it really didn't matter that he was the greatest bassist in the world! He was unreliable and hard to be around and out of his mind. Really, really sad but it said a lot."

Any specific tips you would like to pass on to Rhythm readers aspiring to become pro studio drummers?

"Play with whomever you can play with. Get out there, do it, put your hours in. It's hard work and you have to be willing to push yourself and go that extra mile. STILL, there are no promises but as long as you're having fun and feeling good about what you're doing and having the experiences that you're having then cool! Keep doing it!"