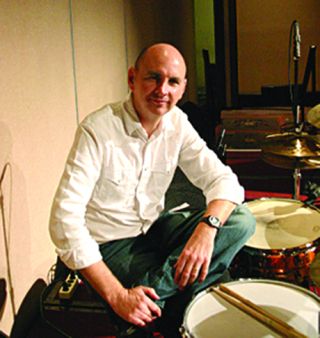 Session playing is all about turning up, putting down a beat and picking up your cheque, right? Er… not quite. You need to know your stuff to be able to nail each and every take. As Neal Wilkinson (Van Morrison) explains, that includes being clued up when it comes to kit.

"I think that's [having a good gear knowledge] really important," Neal told us. "It depends what you're doing. The drums have to be maintained really well, particularly if you're doing it yourself, but you have to have the confidence that your gear is in good shape, the heads aren't pitted, nothing is rattling or squeaking.

"If somebody says, this is a big band thing, or a small jazz thing, then you have to have the knowledge of what's going to work drum-wise..."

"Once you get beyond that, that stylistically you're taking the right stuff for the gig. Sometimes a producer might want something to sound not particularly good. I've got a snare drum that's got some rattling snare wires but it sounds kind of trashy. If you read about somebody like Jim Keltner he has stuff that sounds weird just because it has a particular vibe about it. If somebody says, this is a big band thing, or a small jazz thing, then you have to have the knowledge of what's going to work drum-wise, heads, cymbals and even sticks, maybe some different sticks to change the texture a bit.

"I think experience brings that, as you work more you gather experience of what works particularly on something like X-Factor where one week you may do four or five different tracks. One could be a Jackson 5 Motown track and the next one could be a Mariah Carey '90s big torch ballad. Just changing the tuning and changing the snare and having a collection of cymbals ready to go. It doesn't need to be that drastic but the key is having options that are ready to go, especially now.

"A good friend of mine who passed away a few years ago, Ronnie Stevenson, he was a big session player during the '60s. He had a little four-piece Rogers kit and he said, 'I decided to get adventurous and have two snare drums, a wood shell and a metal shell. I used that on everything. Four drums, two or three cymbals and a spare snare drum.' Then after every session he'd throw it in the back of the car and take it to Ronnie Scott's.

"I think things have moved on because producers use drummers all the time. The might say they want a Stewart Copeland snare, or a Motown sound, or we want a Steve Gadd thing. They tend to use big drummers to identify the sort of sound they are going for and some people's pride can be dented by that but generally you know what they are trying to say. I did a Beatles orchestral album at the end of last year and I was all ready to take my Ludwigs down there because it was at Abbey Road and the guy said to me, 'We're not going for a '60s thing, it's supposed to sound modern.' In the end I took my Yamaha kit down and it sounded great. I think it is very important to be aware of what your gear can do and what you can say with it."