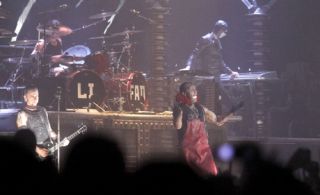 13:30: We arrive on site with the sound of Soulfly absolutely slaughtering the Saturn Stage with a superb, ridiculously heavy version of 'Roots' ringing in our ears. Is there a more metal way for our festival to have begun?

13:40: No time to stand admiring Joe Nunez and co though, as we're straight backstage to catch up with Papa Roach's Tony Palermo who fills us in about his favourite drummer, his warming up routine and what's coming up for the nu-metal stars. Keep your eyes peeled on this site for what he had to say.

14:50: Back out into the arena and the metal feast continues as Gene Hoglan is giving a double bass masterclass with his Fear Factory buddies. It's frightening how fast and powerful this guy is and we, along with tens of thousands of others, are in awe as the Factory's set comes to a close.

15:50: The afternoon takes a turn for the singalong with the double combo of Papa Roach and Good Charlotte. Both are awesome fun, with Tony Palermo's boys armed with killer festival tunes 'Last Resort', 'Getting Away With Murder' and 'Between Angels and Insects', before Dean Butterworth and co instantly win over a potentially hostile crowd with the infectious 'Lifestyles of The Rich and The Famous', 'The River' and even a cover of The Police's 'So Lonely'.

19:40: Speaking of singalong festival tunes, as night falls out come Mötley Crüe. Tommy and co take a few songs to get into their stride (not helped by a handful of technical glitches), but when they click, they're surely the funnest band on the planet. 'Wildside', 'Dr Feelgood' and 'Girls, Girls, Girls' are tailor-made for a show like this, while 'Ten Seconds To Love' and 'Rattlesnake Shake' also make welcome appearances as Mötley well and truly get the Saturday night party up and running.

21:00: While Mötley get the party started, Rammstein take the night in a very different direction - from a carnival to a downright freak show. There's explosions, pyro and the flamethrower-wielding Till Lindermann, although no bearded ladies, unfortunately. Luckily they have the tunes to back up the gimmicks (although we're not sure whether setting someone on fire counts as a gimmick), as 'Du Hast', 'Sonne' and 'Feuer Frei' blast out of the wall of speakers with ten times the power of anything else we've heard today. After 90 minutes we're exhausted, the front row's eyebrows are singed and it's the end of Saturday at Sonisphere…