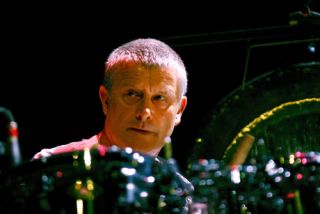 We were on hand at Victoria Park this weekend for the first-ever High Voltage Festival. Day two promised a bag full of treats courtesy of Clutch, Joe Bonamassa, Emerson, Lake and Palmer and more, but did it deliver? Check out our verdict below…

The Quireboys are perhaps the perfect pick to get day two at High Voltage underway. Clearly rejuvenated after many a year in the doldrums, they turn their main stage opening set into a mass singalong.

Over on the Metal Hammer stage it's more of an intense musical journey rather than a singalong as Clutch give a ten-song masterclass in owning a stage. Drummer Jean-Paul Gaster in particular is on top form, absolutely drenched in groove as the likes of 'Struck Down' and '50,000 Unstoppable Watts' get the crowd moving in the mid-afternoon sun.

The crowd might not be moving for blues master Joe Bonamassa back on the main stage, but they're certainly enjoying his mesmerising, if at times slightly self-indulgent, performance.

On first glance Joe Elliott's Down 'N' Outz - the Def Leppard singer and The Quireboys playing rare tracks by, or connected to, Mott The Hoople - seem a fairly shameless vanity project. Somehow though it works. The songs are great and the band are tight, even if drummer Phil Martini fails to crack the merest hint of a smile all set - not even when Ian Hunter comes out for a guest spot.

Unfortunately things turn a little sour towards the end of the set as Joe and the boys are cut short, presumably for overrunning their allotted time, leaving the Def Lep man looking none too pleased to say the least as he tries to use a now switched off mic to make himself heard over the wave of advertisements now blasting out of the main stage speakers.

And finally we come to Emerson, Lake and Palmer. Back together for the first time in 15 years seemingly for a one-off show, they return with everything you'd expect. Huge drum kit and a raft bells, whistles, cymbals and gongs? Check. Too many keyboards for one man to ever use in a single set? Check. An absolutely triumphant return filled with prog epics? Check, check, check. It's a fitting end to a festival that has backed prog from the word go, and by the looks of things, their faith as been well and truly rewarded.