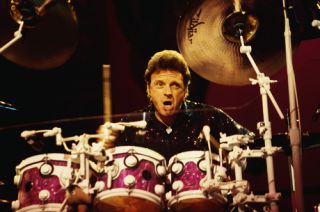 11:00 - We're up and at the Ronnie James Dio Stage at the ungodly hour of 11:00 and LA metallers White Wizard have the unenviable task of rousing the crowd from their hangover-fuelled haze. They take the challenge on head on, with Maiden-esque sound going down well with the Donington crowd. Which is no great surprise, I suppose.

12:00 - Its not all sitting about watching bands all day for us, you know. We also get to meet awesome drummers too (it's a hard life, I know). We head off backstage to catch up with Andy Hurley (who's here with The Damned Things) and Steel Panther's larger-than-life sticksman Stix Zadinia.

13:10 - Now this is what Donington's all about. We're back out just in time to see the end of Saxon's nostalgia-filled set.

13:45 - Back to the press area as we chat with Billy Rymer, Corey Taylor, Gavin Harrison and Al Murray. Most of which takes place with Slash rockin' the Main Stage in the background.

15:30 - Luckily we're able to check out the last few songs from the iconic axman, who has former Union drummer Brent Fitz behind the kit. It's great stuff from what looks like an as tight as you can get line-up. 'Slither' and 'Paradise City' bring the set to an end, and get Donington well and truly on its feet. Frontman Myles Kennedy (of Alter Bridge fame) absolutely nails the vocals.

17:00 - Speaking of which, we manage to catch up with Brent after Slash's set. Slash and Myles wander past with their dinner as we chat drums, life on the road and Brent's love of die cast hoops.

18:00 - We knew it would be too much to ask for the sun to stay but all weekend. But even we didn't expect such an almighty downpour. We leave Brent in state of bemusement at the weather, as we venture back outside he asks us if this is normal for the UK. Unfortunately, it is and we warn him to expect more of the same when he plays Glastonbury with Slash later in the summer.

18:50 - We may be drenched, but Steel Panther manage to keep us smiling. Stix Zadinia may be dressed in spandex and sporting the largest perm this side of 1986, but he's as solid as a rock behind the kit and manages to make everything look as easy as pie. While Stix keeps things steady, frontman Michael Starr provides the laugh out loud moments, of which there are plenty. All of which are far too x-rated to go into here.

20:50 - Aerosmith are left with the task of raising the spirits of 100,000 rain-soaked rockers, but (as if there was any doubt) they're more than up to the challenge. 'Love In An Elevator' instantly improves the mood, before Joey Kramer and the Boston boys whip through a 17-strong set of singalong tunes. The perfect way to round off a great weekend.