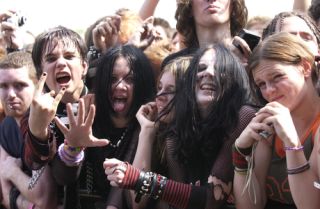 Day two at Download 2011. No sun. A smattering of cloud. Plenty of killer performances.

11:45: First up for us this morning are Swedish melodic rockers Houston. They opt to complement their brand of Europe meets Poison rock with ripped white denim, leather strides and dry ice. Still, at least the Natal kit they're using sounds meaty.

12:45: After catching a few tracks form hardcore up-and-comers TRC we're off into the press area for a chat with Down's Jimmy Bower, who fills us in on the state of play with new material that they have on the horizon. He also gives us a suitably enthusiastic photo shoot (heavy metal growls and all), much to the bemusement of those enjoy the acoustic set from The King Blues happening next door at the same time.

14:00: While Skindred are bringing the main stage crowd to its knees with their ragga rock mash-up and Rock Sugar are splicing classic rock anthems (Queen, Motley Crue and AC/DC among those featured) we're talking to Skunk Anansie man mountain Mark Richardson and getting showmanship tips from Escape The Fate. Again, look out for those on our YouTube channel.

15:45: Back out to the second stage to catch Clutch put on one hell of a set. Jean-Paul Gaster brings the groove as they deliver some of the finest moments of the weekend so far.

17:40: Remember a few lines further up we said Mark Richardson was a man mountain? Here's the proof. The hard-hitter guides Skunk Anansie through 60 minutes of hits and new material, with 'Twister (Everything Hurts)' in particular going down a storm. Richardson is power personified throughout. Wonder how many cymbals he gets through.

19:20: Avenged Sevenfold take to the stage and immediately claim the day as their own with at atmospheric and utterly breathtaking performance. They bring the rock with 'Beast and The Harlot', 'Nightmare' and more, before dedicating two tracks (including 'Afterlife') to the late Jimmy 'The Rev' Sullivan, just about bringing the place down in the process. Arin Ilejay does an impeccable job matching The Rev and Mike Portnoy's work beat for beat throughout. Future Download headliners? On this showing, most definitely.

20:15: While Avenged are putting in an earnest, emotion-filled performance, over on the second stage Twister Sister are giving an unashamedly fun spectacle. Dee Snider, pink mic stand and all, is the ringmaster as the '80s glammers get the whole field singing 'I Wanna Rock'. And they do.

21:00: Alice Cooper provides the perfect main course to Sister's appetiser as far as the classic rock feast of the evening goes. The band gives (how many times have we said this already this weekend?) a greatest hits set packed with 'Schools Out', 'Poison', 'Feed My Frankenstein' and a tonne more.

21:35: Meanwhile, after making a fashionably late entrance, System Of A Down are off and running. It's like they've never been away. John Dolmayan is still an absolute hard rock master, and 'Chop Suey', 'Prison Song' and 'Aerials' are still stone cold modern classics.

22:40: System launch into 'Sugar'. Donington loses its mind. A fitting end to a monstrous day of rock.