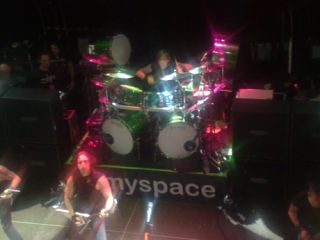 Last night we were lucky enough to be invited to Bullet For My Valentine's secret show at Islington Academy, and we can confirm that they rocked the tiny venue to its core.

The 800-capacity Academy was absolutely rammed for the secret MySpace show, which left reams of disappointed fans unable to get blag a wristband left outside.

After what can only be described as a blast beat masterclass by Rise To Remain, Bullet took to the stage and immediately brought the place to its knees.

Opener 'Your Betrayal' displayed Moose's can't-take-you-eyes-off-him style right from the off, with ferocious double kick and lightning fast tom and cymbal work helping whip the already sweat-drenched crowd into a frenzy.

As the set wore on Moose continued to control things from the back, with his left-handed hi-hat work phasing into right-handed cymbal riding showing just why this month's Rhythm cover star is gaining more attention by the day.

But, it's not just his chops and open-handed style that guarantee attention for the Welshman. Last night he emphasised just what the band's camp have been saying in the run-up to the release of new album Fever, he, and the band as a whole, have grown up.

Gone are the showy fills and tricks, instead Moose has developed a rock steady style that shows flashes of his undoubted skills without straying into the self indulgent.

Non more so was this evident than on the collection of new tracks played in front of the ridiculously enthusiastic Islington crowd, with each new cut instantly taken to heart as a fan favourite.

'The Last Fight' and set closer 'Alone' proved particularly popular with the die-hards, although every second of the 12-song set was lapped up.

For more on Moose and Bullet For My Valentine, pick up the latest issue of Rhythm.