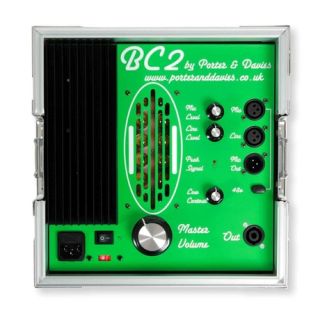 Porter and Davies, inventors of the ingenious and infamous bass drum monitor the BumChum, have announced the worldwide launch of their new tweaked version - the BC2.

The new system packs several new features, as well as the new name, but also a new lower price.

You can now pick up the BC2 for £999, with Porter and Davies explaining that increased production volumes means that they can offer the BC2 at a cheaper price.

The new system includes a voltage selector switch, Phantom Power, a line XLR socket, NL4 sockets and connector leads, a smaller flight case and an overhauled throne which Porter and Davies claim is more comfortable than the previous version.

A host of top-draw sticksmen have added the BC2 to their set-up, including Porcupine Tree's Gavin Harrison. He explained why: "The Porter and Davies BC 2 gives me a reassuring feeling every time I hit the bass drum. It really gives me control of my pedal articulation - and that in turn makes it easier to play the bass drum more accurately".

For more details head to www.porteranddavies.co.uk.