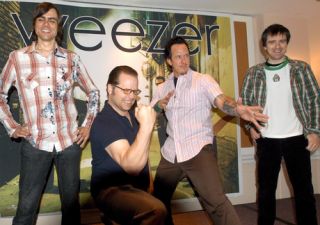 There are plenty of things you could do with $20 million. One of which is forcing Weezer into retirement, according to Pat Wilson.

The drummer, and of late sometimes guitarist, has responded to a recent campaign from a particularly cheeky fan who wanted to raise $10 million for the band in return that they call it a day.

Burns' petition whined: "Every year, Rivers Cuomo swears that he's changed, and that their new album is the best thing that he's done since Pinkerton, and what happens? Another pile of crap like 'Beverly Hills' or 'I'm Your Daddy'.

"This is an abusive relationship, and it needs to stop now. I am tired of my friends being disappointed year after year. I am tired of endless whimsical cutesy album covers and music videos. I'm sick of hearing about whatever this terrible... excuse for a band is up to these days."

Wilson has given a tongue-in-cheek response to the whole thing, saying on his Twitter page, "If they can make it 20 [million], we'll do the 'deluxe breakup'".