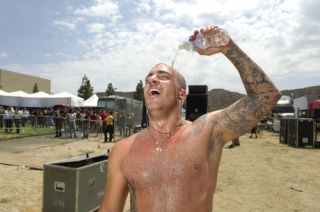 Pedicone, who left The Bled back in 2008, was behind the kit for MCR's London show at the weekend, and he has confirmed through his Twitter page that it is a permanent arrangement.

Check out this clip from the London gig, below.

This isn't the first time that Pedicone has joined up with MCR. He also guested with the emo megastars at a 2007 show. We've tracked down a clip of said performance below, be warned though, it's more shaky cam than HD sharp.

The incredibly muffled tub thumping starts at around the three minute mark, after all of the mutual backslapping from Gerard Way.