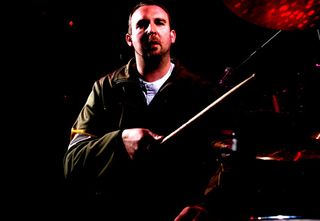 You've heard what Karl Brazil and Troy Miller had to say, and now here's James Hester's look ahead to Rhythmfest.

"The live band side of Malachai are on hiatus whilst Scott and Gee promote the album in the US and record the second album, so recently I've been working with Pitchshifter off shoot Gunslingerblack and I'm working on my own project with Damon Minchella (The Who/Ocean Colour Scene/Paul Weller), Kieron Pepper (Prodigy/Dead Kids) and Andy Norton (The Crimea). Geoff Barrow from Portishead had a big hand in the drum sound on this, so it sounds killer. I've just finished an album that's being released that I did with most of Robert Plant's band and was produced by John Leckie called Men From Mars, plus I've been working a lot with Kerrang! favourites Cars On Fire. I'm head of drums at BIMM Bristol and doing my MA in teaching there."

"I said yes to a gig, found a kit, learned to play it and did the show all in three weeks. I'm pretty chuffed to say that I've never not had a gig in my diary since. That was 20 years ago. Hooked since that day!"

"Nicko McBrain initially but then Steve White who became my teacher and a good mate. Steve really taught me the importance of being a great drummer but being an even better musician. Between then and now Pete Riley and Stanton Moore have also become influences, teachers and friends. All my favourite musicians influence me."

"It's got to be that point that Steve said to me and has been reinforced time and time again about being a musician first. My favourite bass player Billy Fuller says the word 'listen' a lot. That's good advice too."

"Remember what you're asking the audience to do - listen to your music - and do the same critically. Would you go to your show? Be honest and remember that no one cares about your drumming, they just want to hear a great band. Do the right thing for music and forget about your ego and you'll be fine."

"A spare hard drive for the brain. You'll fill it up."

What are you going to be covering in your classes?

"Playing music! I'll be looking at loads of things from applying stickings in lots of ways, some linear stuff, coordination and independence ideas plus how to approach playing a track, being creative and applying all the drummy ideas practically in a musical setting."

"A metronome. A drummer with bad time is not a drummer. There are so many reasons to buy a metronome. Come on the Rhythmfest - I'll prove it!"

You can read more about Rhythmfest here.