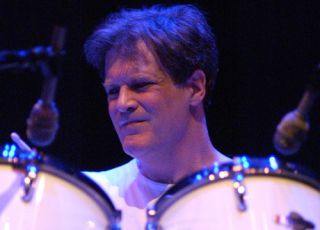 In the latest in our series of Meet The Rhythmfest Tutors, we catch up with Gary Husband.

What was your first gig? "

"Familiarise yourself with and study as many different styles of music as possible, and the people who've been great in those styles. Work on your time, your feeling and your confidence. Try to make friends with and play with the kind of musicians you'd like to be playing with. Record yourself often, and listen back after playing with people. Is it close to what you meant your playing to feel like or was it serving the music? Be the best you can be and try to get hooked up with like-minded artists. Networking is also important. The aim is to start getting heard by people you'd like to hear you."

"An open mind and some true aspiration."

What are you going to be covering in your masterclass?

"I like to think I'll be covering musicality, chiefly - and as many aspects of that as we'll have time to cover. That's my motto - it's all about the music, whether it's abstract, classical, folk, blues or all kinds of jazz, rock or pop. The drummer is a musician first!"

"Gear is not a major concern. On some of my favourite projects that I have played on, I played on dismal drum kits. You can be playing on dustbins and cardboard boxes and make amazing music. Maybe some cool clothes and maybe some antiperspirant for when you get through the gig or session and don't want to smell too bad. These, and oh yes, BUY your music. PAY for CDs and downloads."

Anything else you want to say?

"As ever, I shall be pleased if even one thing I may say (or play) may be either helpful or inspirational to someone. Events like this are never about someone like me 'showboating', this is about me hopefully being of some help to aspiring players. That's as much as I ever hope to achieve. That's why I'll be only too pleased to be there."

To learn more about Rhythmfest head to this website.