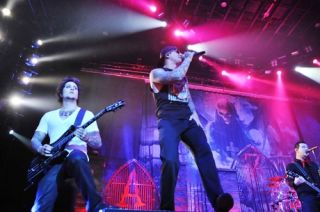 The parents of Jimmy 'The Rev' Sullivan helped prevent Avenged Sevenfold from calling it a day, guitarist Synyster Gates has said.

Gates told The Pulse Of Radio that keeping the late drummer's legacy alive was key in saving the band.

He said: "For the first two weeks after he passed, we were done as a band. We were just done. And because of the fans and Jimmy's parents and relatives and stuff like that, they just demanded that we continue on and spread the legacy that is, you know, the crazy James 'The Rev' Sullivan.

"And we feel so good doing that and they completely expedited that process. They really got our ass in gear to get out and finish the record and bring it to life, you know."

Avenged Sevenfold play this year's Download festival with Arin Ilejay behind the kit.