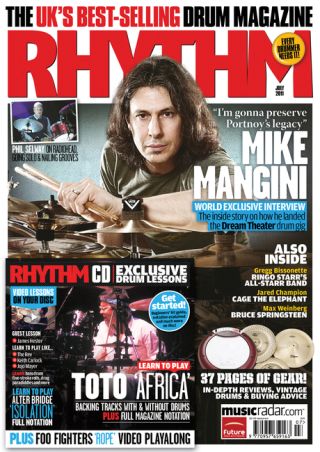 Mike Mangini gives us the inside story on how he landed the Dream Theater gig in this huge cover feature. From his US home studio Mangini talks preserving Portnoy's legacy, creating his own and that grueling audition process. We also take a look around his frankly massive set-up, take tips on playing odd time signatures and delve deep into Mangini's technique behind the kit. Plus: Take a look at the six guys that missed out on the much-coveted Dream Theater gig.

Gregg Bissonette talks sessions, technique and double drumming with Ringo and the All Starr Band

Learn how to play tracks by Alter Bridge, Toto and Foo Fighters with our tuition disc. Also find out how to play like The Rev (Avenged Sevenfold) and Keith Carlock and also take tips on double kick playing, hip-hop beats, set-up fills and more.

Bag yourself a Dixon Bubinga snare worth £441 and Sonisphere tickets!

You can pick a copy up from all good newsagents or order online at www.myfavouritemagazines.co.uk from 7 June.