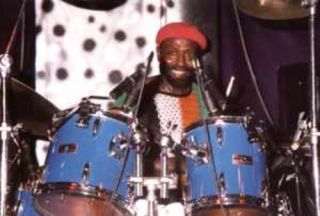 One of the true originators of the one-drop beat, Winston Grennan appeared on classic recordings by Jimmy Cliff, including 'The Harder They Come' and 'You Can Get It If You Really Want' (see that track fully notated in this month's, ie: October's Rhythm). He also laid down beats on Bob Marley's early records, as well as recordings by Toots And The Maytals, Peter Tosh, Gregory Isaacs and almost every other Jamaican artist recording between 1962 and 1972.

Born in Jamaica in 1944, Winston started out as a singer and keyboard player until one night, called to sit in for the AWOL drummer with his band the Carribeats, he realised his calling as a sticksman.

In 1972, Grennan relocated to New York, studied jazz, and found himself in demand for recording sessions with the likes of Aretha Franklin, Marvin Gaye, Dizzy Gillespie and Paul Simon and was even the drummer for early-'80s popsters Kid Creole And The Coconuts.

Winston sadly passed away in 2000, but his huge recorded legacy, particularly in the reggae genre, is little short of remarkable.

For 100 moreDrum Heroes, get yourself a copy ofRhythm Presents 100 Drum Heroes, available in the shops,onlineand onNewsstand foriPad, iPhone and iPod Touchright now! It's got loads of interviews and profiles with a ton of drummers, plus it's beautifully illustrated with classic and new photographs!